Your A little Humor to Keep You Smiling  ! 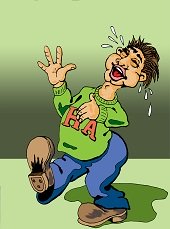 Improve the postal system, mail them their paychecks.

I plan on living forever.  So far, so good.

Friends--the people who stab you in the front.

It pays to remember your social obligations.  If you don't go to other people's funerals, they will not go to yours.

Take time to smell the roses, and eventually you will inhale a bee.

If at first you don't succeed, call it version 1.0.

Junk: Something you need the day after you throw it away.

What happens if you get scared to death twice?

If thine enemy offend thee, give his child a drum set.

I think, therefore, I am overqualified.

You never learn to swear until you learn to drive.

Pun:  The lowest form of humor, unless you thought of it first.

Experience is the comb life gives you after you go bald.

The buck doesn't even slow down, sometimes.

Maturity is switching from passive voice to active voice.

Where there is a will, I want to be in it.

Since light travels faster than sound, some people appear bright until you hear them speak.

Knowledge is knowing a tomato is a fruit.  Wisdom is not putting it in a fruit salad.

They begin the evening news with "Good Evening", then they proceed to tell you why it isn't.

In filling out a job application, where it says "In Case of Emergency, notify:, I always put "DOCTOR".

I didn't say it was your fault, I said I am blaming you.

Women will never be equal to men until they can walk down the street with a bald head and a beer gut, and still think they are sexy.

A clear conscience is the sign of a fuzzy memory.

Apparently, there is a fine line between cuddling and holding someone down so they can't get away.

I used to be indecisive.  Now I'm just not sure.

To be sure of hitting the target, shoot first and call whatever you hit the target.

Nostalgia is not what it used to be.

Change is inevitable, except from a vending machine.

Why do croutons come in an air tight package?  Are they not already stale bread?

What hair color do you put on a drivers license of a bald man?

What happened to Preparations A thru G ?

When a new baby comes into a family, many changes are necessary.

It was a sad day for the rattlesnake family, the time had come for the children to strike out on their own.

Those who iron clothes have a lot of pressing demands.

She had a sweet disposition until the bitter end.

A little boy fired his light-colored crayons because they wouldn't show up.

After taking the elevator to the top floor, I felt very up-lifted.

Don't needle a hairdresser when she's trying to stylus.

My job at the concrete factory keeps getting harder and harder.

Pencils could be made with an eraser on both ends.  But what would be the point?

Pencil sharpeners have a tough life.  They life off tips.

Every calendar's days are numbered.

An electrician is a bright spark who knows what's watt.

No one knew she had a dental implant until it came out in a conversation.

Be kind to your dentist because he has fillings too.

My cavity was not fixed by my regular dentist, but by a guy who was filling in.

A dentist and a manicurist fight tooth and nail.

She was so thrifty, she could smell a bargain a mall away.

Atheism is a non-prophet organization.

If a deaf child signs swear words, does his mother wash his hands with soap?

Is there another word for "synonym"?

Where do forest rangers go to get away from it all?

Would a fly without wings be called a "walk"?

Why do gas stations lock rest rooms?  Do they think someone will break in and clean the place up?

If a turtle does not have a shell, is he homeless or naked?

Why do banks put braille on the drive-through bank machines?

What was the best thing before sliced bread?

Do infants enjoy infancy as much as adults enjoy adultery?

If you ate pasta and antipasto, would you still be hungry?

Whose cruel idea was it for the word "lisp" to have an "s" in it?

If you try to fail and you succeed, which have you done?

Why is it called tourist season if we can't shoot at them?

Why is there an expiration date on sour cream?

When chemists die, they barium.

Jokes about German sausage are the wurst.

I know a guy who is addicted to brake fluid, he says he can stop at any time.

How does Moses make his tea?  Hebrews it!

I stayed up all night to see where the sun went.  Then it dawned on me.

The lady said she recognized me from the vegetarian club, but I have never met herbivore.

I am reading a good book about gravity.  I cannot put it down.

They told me I had type A blood, but it was a Type-O.

My husband did not like his beard at first, then it grew on him.

I wondered why the baseball was getting bigger, then it hit me.

England has no kidney bank, but it has a Liverpool.

Copywriter: Karen B. Cardwell 2012.   Email me at: cradwell.kc@Gmail.Com